How much of the world’s population has access to mobile phone coverage?

EPAR’s 2014 Review of Mobile Coverage utilized GIS mapping tools, industry-reported coverage information, and population data to estimate the number of people living outside mobile coverage areas in 2012 at just under 821 million, or 11.7 percent of the global population. Of the uncovered population, nearly 92 percent live in rural areas.

As seen in the map below, uncovered rural areas are concentrated in Sub-Saharan Africa and across South, East, and Southeast Asia, where incomes are lower than in other world regions, and remoteness may be exacerbated by geographical barriers. 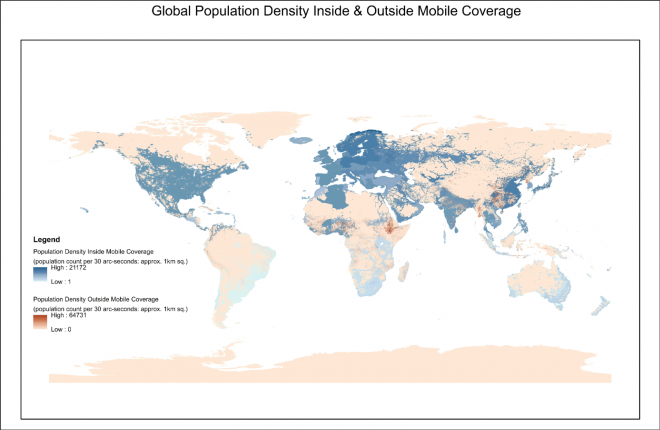 What are the trends in mobile coverage expansion?

Low population density, low per capita incomes, difficult geographies, and remoteness are some of the barriers to expanding mobile coverage in rural areas. EPAR synthesized data from several different sources to analyze changes in the levels of mobile coverage from 1999 to 2012. Globally, the rate of coverage expansion has slowed as mobile coverage has reached near universal levels in urban areas, with a few exceptions (notably Ethiopia). For example, the percentage of the urban population in Sub-Saharan Africa with mobile coverage increased from 17 in 1999 to 95.7 in 2012, but most of these gains were concentrated in the first few years of this period. A 2011 World Bank report finds that the higher costs and lower potential profitability to networks of providing coverage to the remaining uncovered regions mean there are fewer incentives for continued private coverage expansion. Just 57.8 percent of rural populations in Sub-Saharan Africa had mobile coverage in 2012. Although there is still much scope for expanding coverage to these populations, we find that here also the rate of coverage expansion has slowed, to just 3.3 percentage points per year between 2009-2012. If the observed trends in the data continue, it is likely that a large number of rural communities will continue to lack mobile coverage for some time.

Will mobile coverage expand to the “final frontier”?

Some researchers contend that market liberalization and increased competition could encourage private network providers to expand coverage further. For example, in the case of Ethiopia, there is only a single state-owned mobile network operator (MNO) active within the country, and this monopoly could be a factor in the lack of mobile coverage outside concentrated population centers. Nearly 90 percent of Ethiopians lived outside mobile coverage in 2012, accounting for 68 percent of the uncovered population in East Africa. EPAR evaluated the association between mobile coverage and indicators of market liberalization, but found no evidence of a relationship. The factors most associated with coverage are income and the rural proportion of the populations – wealthier, more urban countries have higher mobile coverage. This evidence suggests that more than just market liberalization will be needed to reach the “final frontier” of uncovered populations and that we cannot expect to reach universal coverage in the absence of an increase in rural income, a reduction in the costs of reaching rural populations (e.g., through new coverage technologies such as Google’s Project Loon or Facebook’s Aquila), or some form of government support or subsidy.