Through the Comprehensive Africa Agriculture Development Programme (CAADP) adopted in 2003, African countries have re-prioritized agriculture as a key lever for development. This priority was reinforced with the Malabo Declaration in 2014, when African leaders pledged to boost investment and productivity in agriculture through increased mobilization of public and private funding. One such source of funding for low- and middle-income countries (LMICs) are international financial institutions (IFIs), multilateral banks and regional development funds that operate internationally and provide affordable financing for development.

IFI investments can signal country development priorities, new technologies and partner opportunities. IFI investment information, however, is often scattered across multiple websites in a range of formats with varying degrees of accessibility. When project-level data are accessible, they are not categorized by standardized sectors nor are they available in one place to compare across institutions. Key stakeholders are hard-pressed to grasp the full landscape of IFI investments in agriculture and clearly see which innovations and solutions are being promoted or scaled.

How can IFI lending illuminate country priorities for agriculture?

A recent EPAR review of publicly available data sought to increase the utility of this information through bringing disparate project information together in a single searchable dataset. Such a tool can illuminate how and where IFIs are lending to agriculture in sub-Saharan Africa and, thus, which countries and funders might be strong partners for different aspects promoting agricultural transformation.1 IFI lending flows are one means to reveal a country’s investment priorities, especially when compiled alongside bilateral funding, national government expenditures, and development indicators.

EPAR scraped current project data from publicly available online databases at the World Bank, African Development Bank (AfDB), and the International Fund for Agricultural Development (IFAD) to assess these IFI flows to agricultural projects in 46 countries of sub-Saharan Africa.2 After collecting current project-level data (regardless of the sector), the team grouped projects relevant to on-farm small-scale producer agriculture by using the IFAD projects’ sector categorization as a starting point (IFAD invests almost exclusively in smallholder land-based agriculture). For example, projects categorized as pertaining to “Agricultural Development,” “Fisheries,” or “Livestock” were included in the On Farm categorization, while projects in sectors such as “Health Facilities and Construction” and “Rural Development” were excluded. Then, On Farm projects were aggregated by institution and by country to get a higher-level perspective on the overall distribution of investments across countries. Therefore, the uniqueness and value of this effort lie not in the data, but rather in the collation of these data in one place to provide an overview of major IFI investment trends.

This dataset can help answer questions from a broad country-level perspective to a deeper interrogation of individual projects. For example, sorting and filtering functions within the dataset can be used to quickly reveal that across all three IFIs included in the database, Nigeria and Ethiopia receive the greatest total volume of funds per year, on average, for projects of any type: $3.58B and $3.02B, respectively. Of that total funding, Ethiopia receives the greatest amount devoted to on-farm agriculture: $584.87M per year, over $200M more than Nigeria in second place. Funding volume roughly tracks with population: Nigeria and Ethiopia are also the most populous sub-Saharan African countries, according to 2019 population data from the World Development Indicators. However, only 1/5th of Ethiopia's and 1/10th of Nigeria’s IFI funds explicitly go to on-farm agricultural projects.  Countries like Malawi and Burkina Faso devote a greater percentage of their IFI resources to on-farm agriculture.  This kind of information can help understand where gaps and opportunities may lie. 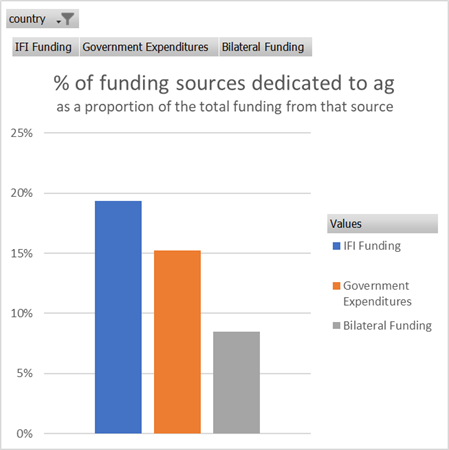 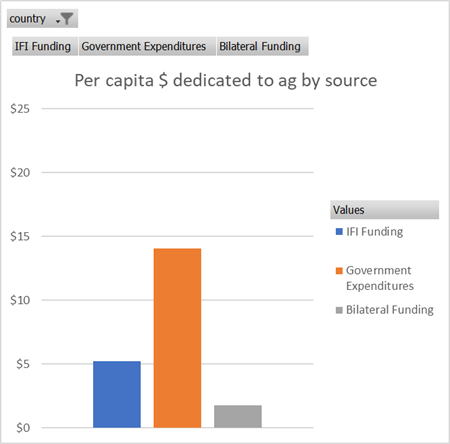 At the project level, this dataset can answer questions about lending for specific commodities. For example:

Other standard project level data details include the start date and duration of the lending, the type (concessionality), and, where mentioned, the crop/livestock focus, target population, and more.

How to use these data

EPAR plans on analyzing IFI funding correlates and is committed to refining and updating the dataset for maximum utility. While it does not currently pull pipeline projects (due to the indefinite nature of those projects), we are considering how it might do so to facilitate proactive, rather than reactive, connections between technology systems and funders.  As an example, an organization eager to scale up cassava seed systems in Nigeria might search this dataset for all cassava-related projects, identify the pertinent project funding, start date, duration, and funder. Equipped with that context, the organization could then reach out to the relevant project team and pitch a partnership.

While IFI funding is not the definitive way to characterize a country’s commitment to agricultural transformation, it does give a glimpse into the priorities of the funder and the country. When examined together with historical funding, other multilateral and bilateral lending flows, and national government expenditures it provides a more detailed project-level picture to compare to country-level metrics of agricultural transformation.

1 The institutions included in the review fund a broad set of countries, but sub-Saharan Africa was the focus of this analysis.

2These 46 countries are defined by the UN Development Program, excluding Sudan and countries in North Africa.

3Note that these projects are current as of the date that the data were pulled, in late January 2021. EPAR plans to conduct periodic updates of this project to ensure current data is timely and accurate.