Long-term Impacts of Cash Transfer Programs: What Does the Evidence Say?

Over the last 20 years, cash transfer programs have become an increasingly common tool used in low- and middle- income countries to promote investments in education, improve health outcomes, and combat poverty. These programs, which provide cash directly to households in specific populations, most often come as either conditional cash transfers (CCTs) or unconditional cash transfers (UCTs). CCTs provide cash on the condition that specific requirements are met, most often including school attendance for children or participation in health check-ups, while UCTs provide cash without any strings attached. According to a recent review of cash transfers by Bastagli et al. (2016) , there are currently about 130 low- and middle-income countries that have at least one UCT, and about 63 with at least one CCT.

What do recent reviews say about cash transfers? 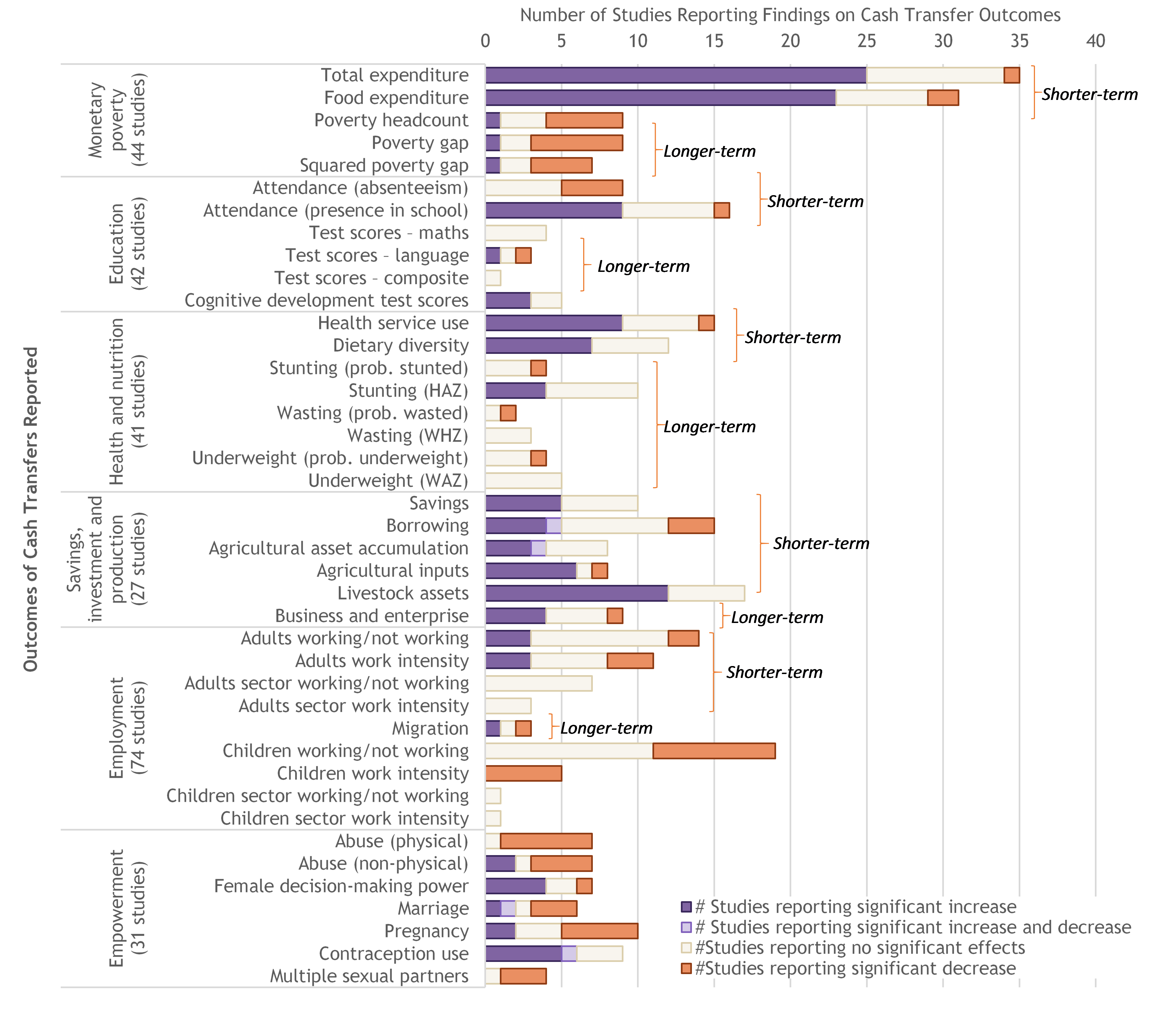 In spite of these limitations, we identified 54 reviews and meta-analyses published since 2010 that report on at least one long-term outcome of interest. Much of the evidence comes from multiple studies evaluating the most prominent cash transfer programs, especially Latin American programs like the PROGRESA/Oportunidades program in Mexico (included in 22 reviews), the Programa de Asignación Familiar (PRAF) in Honduras (in 15 reviews), Nicaragua’s Red de Protección Social (RPS) (in 15 reviews), and Brazil’s Bolsa Familia program (in 13 reviews). However, 36 reviews include findings on long-term impacts of cash transfer programs in sub-Saharan Africa and 18 report findings from programs in South Asia.

What are the long-term impacts of cash transfers in low- and middle-income countries?

Figure 2 summarizes our findings on the primary long-term outcomes reported on in the reviews, organized by general outcome area. The majority of the evidence is “positive”, indicating that studies report that cash transfer programs had the desired impact, such as decreasing stunting frequency or early marriage, or increasing investment or women’s savings. Many reviews, however, report “mixed” evidence (positive or no significant impacts), while just two reviews find evidence of negative impacts from studies of cash transfer program effects on child anthropometric measures. 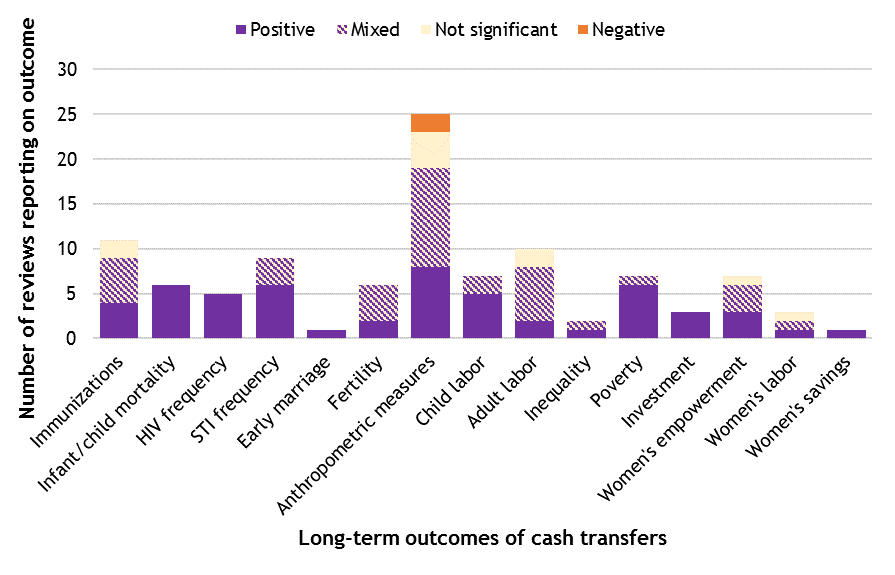 While most reviews discussing general health report on short-term outcomes like health visits, 27 report on longer-term outcomes. One review reports that Mexico’s Oportunidades cash transfer program increased immunization rates for TB and measles in the first six months (with long-term impacts from reduced risk of these diseases), but showed no impact after one year. Another review finds that a cash transfer program in Niger reduced child mortality by 74% in communities experiencing drought. Increased health visits is the most common pathway cited as leading to improved long-term health outcomes.

Twenty reviews report on long-term reproductive health outcomes, with generally positive impacts on HIV and STI frequency and delayed marriage but mixed impacts on fertility. One review mentions that adolescent girls in both a UCT and CCT in Malawi had reduced HIV prevalence as compared to non-beneficiaries. Although there are some anecdotal arguments that increased fertility may be an unwanted side-effect of cash transfer programs, this is not supported by the evidence. A meta-analysis involving programs in Honduras, Nicaragua, Mexico, and Uruguay shows no significant impact of cash transfers on fertility. Multiple reviews cite increased education and income as pathways to improved reproductive health for cash transfer recipients.

The available evidence shows mixed impacts on the most commonly measured long-term nutrition outcome, which is anthropometric measurements such as child height and weight. One review reports increased weight for beneficiary children in Brazil, Nicaragua, and Mexico, but no impact in Peru or Malawi. Another review examines six studies carried out on cash transfer programs in Mexico, in which four of them report a decrease in stunting prevalence while the other two report no impact. The most common stated pathway for improving anthropometric outcomes of children in households receiving cash transfer is increased access to both the quantity and quality of food.

For labor market outcomes, the evidence generally indicates reduced child labor intensity as an outcome of cash transfer programs. One meta-analysis of programs in Latin America and South Asia shows decreased child labor rates, especially for boys. While some opponents of cash transfers argue that they may act as a disincentive to work for recipients, most reviews report positive or no significant impacts on adult labor. One of the few negative examples was a review of CCTs in Latin America that finds reduced adult labor market participation in Nicaragua for cash transfer recipients but no impact in Brazil and Mexico.

For poverty outcomes, we find evidence showing that cash transfers have decreased inequality in Brazil, and reduced overall poverty in Mexico and Nicaragua. In addition, pensions in Namibia and South Africa have contributed to increased investment. Increasing participation in productive activities of cash transfer recipients is described in the evidence base as both a positive outcome and as a pathway to long-term reductions in poverty.

The evidence of long-term impacts on women and intra-household decision-making, such as women’s empowerment and labor, is largely mixed. One review shows an increase in women's savings in Kenya, Malawi, and Ghana. Another review reports on evidence from CCTs in Mexico, Brazil, and Nicaragua which suggests that women’s control over resources and self-esteem are improved as a result of cash transfer programs. A recent review of the evidence on cash transfers reports that a few studies find an increase in women’s time spent on domestic work linked to cash transfers, which the authors suggest may be due to mothers compensating for increases in girls’ school attendance, which is consistently associated with receipt of cash transfers. The same review finds that transfers tend to increase women’s decision-making power and reduce physical abuse, but notes some evidence of increased emotional abuse of controlling behavior by male partners. The pathway from cash transfers to improved outcomes for women is unclear, with mixed results from targeting women.

Only two reviews report on financial inclusion outcomes, both reporting only positive impacts. The first review reports on increased inclusion from using cell phones and debit or smart cards, while the other review reports on an increase in remittances and savings for recipients of cash transfers.

What additional factors should be considered when evaluating cash transfer programs?

Our review has highlighted that published studies largely report positive long-term impacts of cash transfer programs in low- and middle-income countries, although overall results are often mixed and outcomes vary by context. A few research gaps remain, including limited evidence on many long-term outcomes. Additionally, more evidence is needed about the lasting impact of cash transfers on vulnerable populations. Finally, as highlighted in one review, more analysis is needed on the effect of program design and implementation on the impacts of cash transfer programs.