Risk – and the perception of risk - shapes our lives and the decisions we make every day. While circumstances vary around the world, risk is ever-present—deciding when to harvest in Iowa or the Southern Highlands of Tanzania both involve climate and crop risk. Risk perceptions also vary widely within and across different subpopulations. Factors such as gender, age, geographic location, and socioeconomic status may influence how individuals perceive risk.

In Mali, a rural smallholder’s perception of risk informs many decisions, including whether to adopt new development projects such as a new seed variety or land management strategy. In a recent paper published in Risk Analysis, EPAR with lead author Alison Cullen analyzes perceptions of risk among smallholder farmers in Mali, with a focus on exploring how gender affects risk perceptions.

What do we know about risk perceptions?

Even within apparently homogenous populations, risk perceptions can vary widely. Previous research on risk perception and gender has shown that in general women tend to be more risk averse than men. This may be due to social factors such as differences in gendered roles or unequal power. A variety of other factors are shown to be associated with risk perception, including age, height, wealth, education, occupation, and health. Some of the factors associated with farmers’ risk preferences are geography, economic status, and understanding of risk.

Much of the previous research around risk perceptions has been carried out in the United States and Europe, and therefore little evidence considers differences specific to the rural smallholder agricultural contexts typical of many low-income countries. Previous research on risk perceptions in Sub-Saharan Africa has primarily focused on pastoralists in Ethiopia, Kenya, and Tanzania, generally finding that gender, wealth, and occupation are predictors of risk perceptions.

Further, although some research on farmer populations in the Netherlands and Sweden explores biophysical, sociodemographic, psychological, and social factors shown to influence risk perceptions and resultant decision making, much of the existing scholarship on farmers focuses on individuals (often male) responding on behalf of households. In many smallholder farming households adults of both genders are farmers, and farm management decisions at both the household and plot level frequently involve both men and women.

What do we find among smallholder farmers in Mali?

EPAR’s research adds to the literature by examining risk perceptions among male and female farmers in Mali using data from the 2010 Farmer First study, funded by the Bill & Melinda Gates Foundation and conducted by TNS Research International. The data includes interviews with both husbands and wives in 1,414 smallholder farm households, with a total of 2,703 observations. The large sample size as compared to other studies of risk perceptions in low-income countries allows for results that are more robust, and the intra-household husband/wife questionnaires allow for a better comparison of differences across male and female subpopulations.

The Farmer First survey asked participants how frequently they worried (not at all, sometimes, all the time) about six different risk categories:

Figure 1. Level of perceived risk by male (M) versus female (F) respondents across six risk domains. Respondents were asked the question: How frequently have you worried about the following risks in the past 12 months? Not at all; Sometimes; All the time. 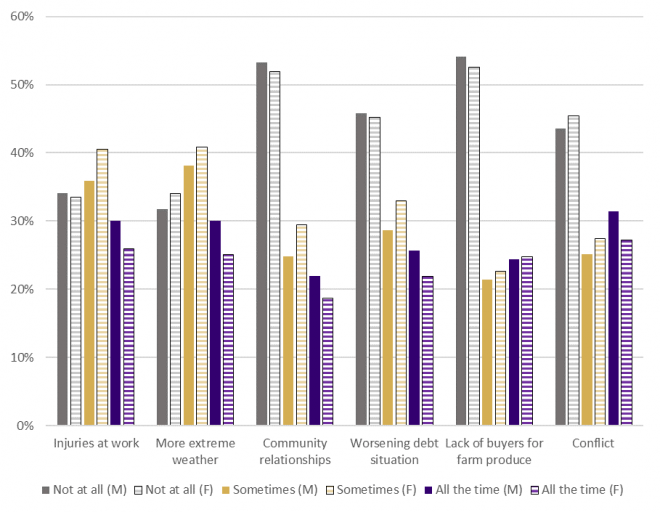 Initial results did not clearly reveal that men and women perceive risk differently. We found that men report worrying “all the time” at higher rates than women, while women report worrying “sometimes” at higher rates than men (Figure 1). However, when controlling for other variables we found that gender is indeed associated with risk perceptions in a countrywide analysis—women worry more about work injury, community relationships, debt, lack of buyers at market, and conflict while men worry more about extreme weather. This result supports previous research finding that women worry more intensely than men about a variety of risks in other contexts. A previous study in Sub-Saharan Africa and another in Vietnam have also found that men perceive stronger risks related to extreme weather, possibly due to differences in gender-based roles and responsibilities.

While we saw a significant association between gender and risk perception in Mali as a whole, this association is largely muted after controlling for geographic location. In particular, when controlling for region, we do not find a significant difference in risk perception between men and women for worry about work injury, extreme weather, and conflict. However, we do find that women perceive more risk with respect to a lack of buyers both when we examine Mali as whole and when geographic location is accounted for, while the effect of gender on perceptions of risk from community relationships and from debt is marginally significant.

Our models controlled for demographic factors such as age, education, health, wealth, time poverty, access to information, and number of children, as well as individual attitudes including social orientation, worldview, optimism, and confidence. Many demographic factors are associated with more worry about particular risks in both the countrywide analysis and in models controlling for region, though which factors are significant varies across the models and by type of risk. The association of individual attitudes and worldview with risk perception, however, is more consistently significant. Farmers with an individualistic, fatalistic, or socially-oriented attitude were more likely to have an elevated perception of risk while those that had a higher risk tolerance and—perhaps unsurprisingly—an optimistic outlook tended to worry less about potential risks.

What is the importance of understanding risk perceptions in Mali?