Digital Financial Services & Gender: An Analysis of Correlates of Awareness, Adoption, and Use

In this report we analyze three waves nationally-representative household survey data from Kenya, Uganda, Tanzania, Nigeria, Pakistan, Bangladesh, India, and Indonesia to explore sociodemographic and economic factors associated with mobile money adoption, awareness, and use across countries and over time. Our findings indicate that to realize the potential of digital financial services to reach currently unbanked populations and increase financial inclusion, particular attention needs to be paid to barriers faced by women in accessing mobile money. While policies and interventions to promote education, employment, phone ownership, and having a bank account may broadly help to increase mobile money adoption and use, potentially bringing in currently unbanked populations, specific policies targeting women may be needed to close current gender gaps.

Access to financial services can enhance low-income households’ ability to invest in their livelihoods, safeguard their assets, manage risks, smooth income, and escape poverty (Cull, Ehrbeck & Holle, 2014; Dupas & Robinson, 2013). Yet worldwide 35% of men and 42% of women remain unbanked (Demirgüç-Kunt et al., 2015). Approximately half of the financially excluded population has access to a mobile phone, which may facilitate access to new digital financial services (DFS) such as mobile money (GSMA, 2015). Increasing access to and adoption of DFS-based technologies such as mobile money may therefore represent a significant opportunity for increasing financial inclusion. This potential may be especially great among the poor, and among rural, low-income women in particular, who in the past have been under-served by conventional bank-based financial services.

In this report we analyze three waves of the Intermedia Financial Inclusion Insights (FII) Survey, a nationally-representative household survey conducted in 2013/14, 2014, and 2015 in Kenya, Uganda, Tanzania, Nigeria, Pakistan, Bangladesh, India, and Indonesia. We run multiple logistic regressions using pooled survey data and country and wave fixed-effects to explore sociodemographic and economic factors associated with mobile money adoption, awareness, and use across countries and over time.

We find that rural respondents and respondents below the Progress out of Poverty Index (PPI) score have statistically significant negative associations with awareness and adoption for each survey wave and for most countries, consistent with less reach of mobile money in these populations. Indicators of education, including level of education acquired and literacy, have a positive association with awareness and adoption across countries and across survey waves. Phone ownership and having a bank account are consistently strongly associated with awareness, adoption, and use of mobile money; and the effects of these factors are the largest in terms of magnitude for mobile money adoption and use.

Women have consistently lower levels of awareness, adoption, and use than men across countries. Even controlling for other sociodemographic and economic factors, we find that being female is associated with an overall lower likelihood of awareness of mobile money. Across all countries, women who are aware of mobile money are also less likely to adopt mobile money than are aware men, with the negative effect of gender increasing in each wave. Gender does not have a significant association with the use of mobile money among those that have adopted it, however, which suggests that barriers to first-time use may be the most important for women’s access to mobile money.

Findings from this research are being prepared for submission to a peer-reviewed journal. In the meantime, a technical report presenting our initial findings is available. A blog post summarizes the findings related to awareness of mobile money, and an interactive data visualization allows users to explore data on awareness, adoption, and use of mobile money by sub-populations over time in the eight countries with FII data.

The code to replicate our analyses is available in a public GitHub repository. 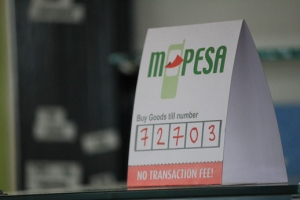