EPAR Technical Report #341
Thu, 08/03/2017
Authors:
C. Leigh Anderson
Travis Reynolds
Pierre Biscaye
Beijie Wang
Matthew Fowle
Jack Knauer
Andrew Orlebeke
Abstract:
Data on public expenditures on agriculture are not systematically collected in any one database. Rather, a variety of sources collect and publish data on certain aspects of agricultural public expenditures. These sources vary in their data collection methods, their frequency of data collection, and the specific expenditures they report on. We collected data on agricultural public expenditures and conducted preliminary analyses for four countries: India (with a focus on Bihar, Odisha, and Uttar Pradesh), Ethiopia, Nigeria, and Tanzania. The data are disaggregated in a variety of ways depending on the source, but we include disaggregated data where available comparing planned or budgeted vs. actual spending, government vs. donor spending, soending by activity or funding area, and spending by commodity or value chain activity. Our goals are to facilitate further analysis of trends in agricultural public expenditures across countries and over time, and to highlight gaps and differences in data sources.

Our research on public expenditures in agriculture includes several outputs. First, we present a slide deck mapping out source of agricultural public expenditure data and data flows in Ethiopia, Nigeria, and Tanzania. This deck was developed based on a spreadsheet collecting information on these data soures, their geographic coverage, the types of expenditure data collected, and notes on the methodologies of the sources.

Second, we prepared a spreadsheet aggregating available Monitoring African Food and Agricultural Policy (MAFAP) data on agricultural public expenditures in Tanzania and Ethiopia. The data are presented in long and wide form and include pivot tables for analysis. The data include amounts of public spending to different sub-categories of agriculture by year from 2007-2014, as well as comparisons between actual and budgeted national and donor spending. These data are the best source we could find for disaggregating public agricultral spending into different sub-categories within agriculture.

Third, we aggregated available public agricultural expenditure data from a variety of sources for Tanzania, Ethiopia, Nigeria, and India into a single spreadsheet. We included data where available from 2006 to 2014, and also distinguish between budgeted and actual expenditures and categories of spending following the distinctions made in the data sources. Based on these data, we prepared a slide deck with figures illustrating the data available to answer questions related to public agriculture expenditure levels and trends, sources and stability of funding, and budget allocations for these four countries.

A final slide deck draws on all of the previous information and presents time series data for Tanzania, Ethiopia, Nigeria, and India for four indicators related to public expenditures in agriculture: budgeted spending, actual spending, share of total spending, and R&D spending. We note what data sources are available for each indicator in each country, and plot data from all available sources on the same figures, for comparison. We then include notes on each data source, including what countries and indicators they are used for, the units they report, and relevant available information on their methodology. 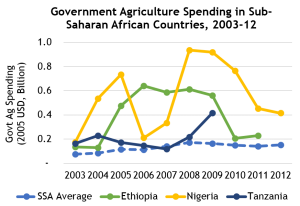