Who Has Heard of Mobile Money?

Digital financial services (DFS) are increasingly seen by researchers and policymakers as an effective tool for combating poverty and increasing living standards around the globe. DFS can reduce transaction costs for sending and receiving money—one study found that users of M-PESA, the largest mobile money platform in Kenya, spent 20 percent less transferring money via M-PESA than physically, or 40 percent less than sending money through the post office. Providers can also reduce their costs through DFS: using agents and digital channels can reduce costs by up to 90 per cent compared to conducting transactions in physical branches of financial service providers. DFS can help deliver program services as well; the non-profit GiveDirectly is using mobile money to provide a universal basic income to a Kenyan village of more than 6,000.

Recent studies have also suggested that the reach and lower transaction costs of digital financial services can help extend financial tools such as microfinance to underserved populations, particularly in rural areas and to women. Fewer women than men are banked worldwide—according to the 2014 Global Findex Database, worldwide 35% of men and 42% of women remain unbanked. According to the Global Findex Database, over two billion adults in low- and middle-income countries (LMICs) have no access to a formal bank account. However, a 2015 GSMA report finds that approximately half of the financially excluded population has access to a cell phone, and could therefore be targets for financial inclusion through DFS.

Access to digital financial services could provide particular benefits to women and households. One study finds that access to mobile money has been associated with a shift in women’s labor out of agriculture and into business or sales. Another study reports that given evidence of different spending preferences between men and women, for example, increased funds allocated to women may also shift the allocation of household spending toward children’s health and education. The study also argues that since digital financial services are also less visible than cash, they may enable some women to discretely shield funds from the community and other household members to support these different spending preferences.

Being aware of the potential benefits and services of DFS is pre-requisite to accessing them. We analyzed awareness of DFS in eight countries using Financial Inclusion Insights (FII) survey data from Intermedia. FII is a nationally-representative household survey that was conducted in four countries in Africa (Kenya, Uganda, Tanzania, and Nigeria) and four in Asia (Bangladesh, India, Pakistan, and Indonesia) in 2013, 2014, and 2015.

In addition to information on respondents’ participation in the financial sector, the survey includes a wide range of socio-demographic information. We analyzed the effect of various sociodemographic characteristics on an individual’s likelihood to be aware of DFS, focusing in particular on differences by gender.

The FII survey records respondents’ awareness of DFS by asking directly whether they had ever heard of mobile money. If they had not, the interviewer would name regional mobile money providers and ask if the respondent had heard of any of them. If the answer to either of these questions was yes, the respondent was recorded as being aware of DFS. 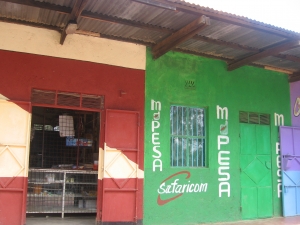 Photo credit: By Realt0n12 (Own work)

What populations are less aware of DFS?

There was a strongly positive relationship between education and awareness of DFS. Relative to people who had no formal education, those who had attended at least primary school were 1.2 percentage points more likely to be aware of mobile money, while individuals who had at least some secondary education were 7.1 percent more likely.

While it is difficult to determine the underlying causes of these results, we can make a number of suppositions. In environments where there are gender disparities in formal financial inclusion, it is not surprising that women are less likely to be aware of DFS. Similarly, having bank accounts, cell phones, and official IDs indicates an engagement with the formal sector, through which individuals may be more likely to have heard of DFS. Since women in all FII survey countries were less likely than men to own mobile phones or have bank accounts and these economic factors had strong, positive relationships with awareness among the general population, access to these factors may also play a crucial role in facilitating mobile money access for women.

Our full report further analyzes the factors associated with DFS adoption, and we find that women who are aware of mobile money are also less likely to adopt the technology than men. The potential benefits of accessing DFS are large, and understanding barriers to awareness and adoption may help policy makers better support efforts to promote DFS among populations historically underserved by the formal financial sector.

By Andrew Orlebeke and Jack Knauer