This is the second in a two-part series on measuring and understanding economic growth and poverty in Nigeria, presenting findings from EPAR Technical Report #327. Nigeria became Africa’s largest economy in 2014. As Nigeria’s Gross Domestic Product (GDP) per capita grew by nearly 70% between 1992-2009, poverty rates fell by 6%. However, while the proportion of impoverished Nigerians decreased slightly, the population grew by 54.3%, increasing the absolute number of Nigerians below the poverty line. In part one of this series, we examine different measures of economic growth and poverty and how the choice of measures may affect findings. Here, we discuss the relationship between economic growth and poverty reduction in Nigeria, explore factors that may influence this relationship, and highlight how this relationship potentially affects aid allocation to countries like Nigeria.

As a country’s economy grows, as measured by indicators like Gross Domestic Product (GDP), scholars hypothesize that individual-level income will increase and poverty will be reduced. While previous research demonstrates this correlation at a global scale, some authors contend that the correlation may be heavily influenced by trends in more populous countries such as China and India, which have seen particularly large economic growth and poverty reduction over the past 30 years. In many developing countries, persistent income inequality may keep poor populations from benefiting from economic growth.

The growth elasticity of poverty (“elasticity”), defined as the percentage change in poverty divided by the percentage change in the size of the economy or average income, is one measure of the association between economic growth and poverty reduction. We compare different economic growth measures and poverty measures in Nigeria between 1992-2009, and find that estimates of elasticity vary across different measures, especially between 1992-1996 and 1996-2003. In both these periods, measuring economic growth using GDP per capita as opposed to GNI per capita (both in terms of constant 2011 $ at PPP) would lead to very different findings, as shown in the figure below. 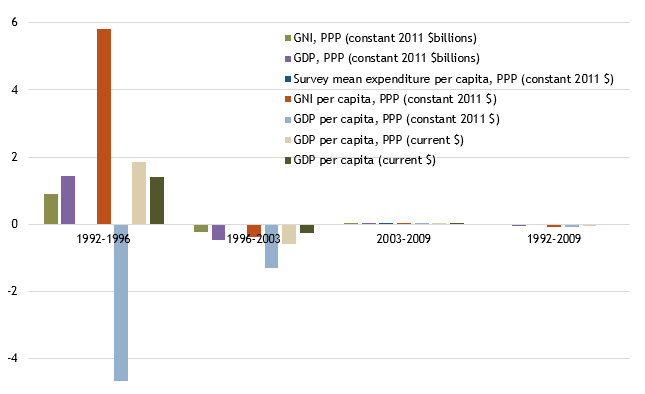 Across the whole period 1992-2009, looking at GDP per capita, PPP (constant 2011 $) we would conclude that economic growth was associated with large decreases in poverty in the early 1990s, but that the magnitude of this relationship has fallen since and that there is now nearly no effect of economic growth on poverty. Looking at the equivalent measure of GNI per capita, PPP, we would conclude that economic growth in 1992-1996 was associated with large increases in poverty, but there has been almost no effect in more recent years.

Economic inequality in Nigeria is growing, with an ever-increasing economic gap between the relatively affluent urban southern region and the comparatively poor rural populations in the north. This gap is largely due to a lack of equal access to infrastructure and education in the north and is further heightened by security concerns with the Boko Haram insurgency. Inequality means that gains from economic growth are concentrated among the already affluent and opportunities for the poor to escape poverty are reduced.

These effects are further exacerbated by dependence on the oil sector, which is estimated to contribute 75% of Nigeria’s government revenue. This sector is not labor-intensive, has a limited trickle-down effect of wealth, and squeezes out other types of investment that might generate more employment in other, more labor-intensive sectors. Countries with economic growth driven by labor-intensive sectors will often see greater reductions in poverty. While Nigeria has seen increases in both the manufacturing and services sectors, the agriculture sector has shrunk and employment opportunities are not growing at the same pace as Nigeria’s population. Because of the lack of employment opportunities in labor-intensive sectors, wealth continues to concentrate among the affluent populations while Nigeria’s unemployment rate remains high.

The Nigerian government’s reliance on oil revenues contributes to opportunities for corruption as the majority of the money is divided between politicians and wealthy oil executives. Due to bureaucratic inefficiency, a weak judiciary system, and red tape, Nigeria is consistently ranked among the most corrupt countries in the world. Government corruption reduces the quality of social infrastructure, diverts public expenditure from social spending, and decreases investments in other sectors. We also see decreased public investment in education and health programs as oil prices have declined in recent years. Public health spending is reported at only 1% of GDP, and low public investment overall exacerbates existing inequalities and limits the ability of poorer populations to take advantage of potential growth opportunities. While Nigeria does not release data on education spending, education levels vary dramatically by region: nearly 90% of adults are literate in more affluent southern states but only 40% of adults are literate in the north.

Corruption may also contribute to the poor quality data on economic growth and poverty in Nigeria, as these data are widely prone to inflation since they affect fiscal transfers from the central government to each state. This data manipulation may lead to inaccurate observations regarding Nigeria’s growth and poverty levels.

This relationship may also affect donors’ aid allocation decisions. Aid organizations use different measures and formulas to evaluate a country’s need for philanthropic aid. Aid allocation formulas that do not separately consider measures of poverty or that place significant weight on measures of income per capita may result in suboptimal aid flows to countries where economic growth is not accompanied by reduced poverty. This may explain why Nigeria is in the bottom ten of aid recipients in terms of aid per capita income and ratio of aid to GDP, despite Nigeria’s ranking as the 14th most fragile country by the Fund for Fragile Peace. The example of Nigeria suggests that movements in per capita income may not be a valid or consistent proxy for poverty reduction in aid allocation formulas or, more generally, as a measure of how well a country is performing.